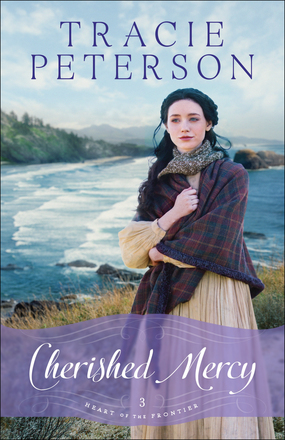 As Oregon Territory teeters on the brink of armed conflict, one woman strives for peace.

Mercy Flanagan survived the Whitman Massacre as a child, and now her heart's cry is for peace between the native peoples and the white settlers inhabiting Oregon Territory. Unfortunately, most of the settlers want the tribes removed from the land completely, one way or another.

At the request of family friend Eletta Browning, who is experiencing a difficult pregnancy, Mercy travels south to the Rogue River Valley to help. At the Browning Mission, she meets Eletta's brother-in-law, Adam. Despite her attempts to befriend him, Adam seems determined to focus on ministering to the local tribes and keeps her at arm's length. Why is he so intent on pushing her away?

When tragedy strikes and tensions in the territory reach the combustion point, Mercy is pushed to the limit of her strength. She and Adam will have to rely on their faith in God and on each other in order to make it out alive.

"Peterson excels at painting a scene, bringing alive both the rugged frontier landscape and the people in conflict over it. . . . This is a powerful completion to an engaging, spiritually sensitive series."