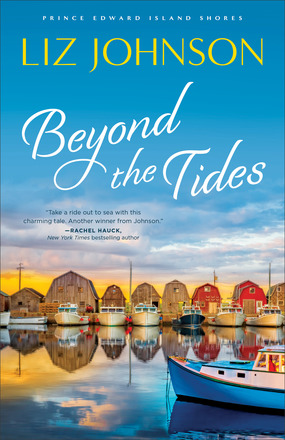 When Meg Whitaker's father decides to sell the family's lobster-fishing business to her high school nemesis, she sets out to prove she should inherit it instead. Though she's never had any interest in running the small fleet--or even getting on a boat due to her persistent seasickness--she can't stand to see Oliver Ross take over. Not when he ruined her dreams for a science scholarship and an Ivy League education ten years ago.

Oliver isn't proud of what he did back then. Angry and broken by his father walking out on his family, he lashed out at Meg--an innocent bystander. But owning a respected fishing fleet on Prince Edward Island is the opportunity of a lifetime, and he's not about to walk away just because Meg wants him to.

Meg's father has the perfect solution: Oliver and Meg must work the business together, and at the end of the season, he'll decide who gets it. Along the way, they may discover that their stories are more similar than they thought . . . and their dreams aren't what they expected.

Bestselling author Liz Johnson invites you back to Prince Edward Island for a brand-new series about family, forgiveness, and the kind of love that heals all wounds.

"Once again Liz Johnson enchants us with life on Prince Edward Island. The story of Meg and Oliver resonates as they grapple with their future, their hopes and dreams, and the surprising romance developing between them. Take a ride out to sea with this charming tale. Another winner from Johnson."

"In Beyond the Tides, Liz Johnson has crafted a hopeful romance that expertly deals with love, loss, and the power of forgiveness. Set against the beautiful backdrop of Prince Edward Island, this is a fun twist on an enemies-to-more love story. Beyond the Tides is full of heart, charm, and a couple you can cheer for all the way to the very end."

"Meg Whitaker has only a few months to prove to her father that she is worthy of inheriting the family lobster fishing business. Never mind that mal de mer strikes as Meg steps foot on any boat, or that Oliver Ross, an old foe, is out to dethrone her yet again. With poignant self-discovery, Meg comes to term with the past, to the hopes and dreams that were stolen from her. In doing so, she unlocks the door to a future, including love. Liz Johnson has a gift for creating flawed and likable characters caught in a heart-wrenching yet romantic tale. Set on gorgeous Prince Edward Island, Beyond the Tides is a perfect summer vacation read."

"Prince Edward Island once again comes alive in the capable hands of Liz Johnson. Readers will find themselves deeply invested in Meg and Oliver's journey--one of legacy, love, and the healing power of forgiveness. Rich in beautiful imagery and drenched in heart, Beyond the Tides proves that the past you run from may just be the key to discovering a future worth chasing."