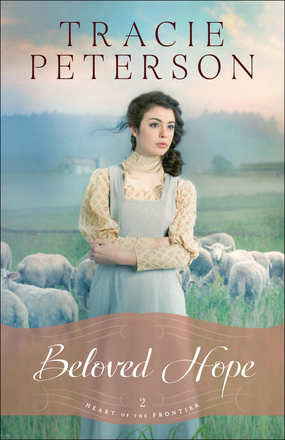 Shackled by Her Past, One Woman Searches for Healing, Forgiveness, and Love

Hope Flanagan survived the massacre at the Whitman Mission, but at terrible personal cost. Safe now in Oregon City, the gentle rhythm of tending her family's flock of sheep is slowly healing her mind and soul, but her precarious new peace is shattered when Hope is asked to testify against the Cayuse responsible for the massacre. She's not sure she can bear to relive the events of those horrific days, but neither can she risk her attackers being released if she doesn't tell her story.

As Hope struggles to make her choice, an Army lieutenant named Lance Kenner becomes an unexpected ray of light in her life. Perhaps she is still capable of love after all. But will Lance still want her if he learns the whole truth of what happened to her at the mission? Or are the secrets that lie in his own past more troubling?

"Peterson creates believable 19th-century characters that will resonate with readers. . . . The characters learn how to rely on God and the Bible in hard circumstances, which doesn't feel trite but hard-earned. This continuation of the Heart of the Frontier series is sure to delight Peterson fans and win her new ones."

"Peterson's second book in the Heart of the Frontier series is a moving tearjerker about fear and forgiveness and the importance of having hope. Peterson writes compelling and accurate historical fiction with strong, likable characters. . . . Faith is a central theme here, and inspirational readers can appreciate how Peterson tackles how her characters reconcile themselves spiritually when trouble and sorrows strike. Beloved Hope is a wonderful story with a tender romance that fans will want to pick up."