An Introduction to Issues and Sources 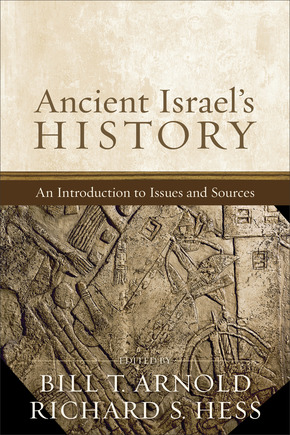 The history of Israel is a much-debated topic in Old Testament studies. On one side are minimalists who find little of historical value in the Hebrew Bible. On the other side are those who assume the biblical text is a precise historical record. Many serious students of the Bible find themselves between these two positions and would benefit from a careful exploration of issues in Israelite history.

This substantive history of Israel textbook values the Bible's historical contribution without overlooking critical issues and challenges. Featuring the latest scholarship, the book introduces students to the current state of research on issues relevant to the study of ancient Israel. The editors and contributors, all top biblical scholars and historians, discuss historical evidence in a readable manner, using both canonical and chronological lenses to explore Israelite history.

Illustrative items, such as maps and images, visually support the book's content. Tables and sidebars are also included.

"An excellent new resource for those interested in taking seriously all the evidence, both biblical and extrabiblical, bearing on the history of ancient Israel and in thinking carefully about how to weigh that evidence and integrate it into a coherent account."

"An engaging examination of the current state of research, Ancient Israel's History finely balances the biblical text and extrabiblical sources while exploring critical interpretive issues and methodological questions. It is comprehensive and readable and will be a valuable addition to the library of students and researchers alike. This volume will be part of my students' curriculum."

"In this incredibly thorough volume, an international and esteemed team of contributors offers us exactly what was promised: a state-of-the-art review of research relating to the history of ancient Israel. In fifteen essays that consider the history of scholarship on topics ranging from ancient Israelite history to Genesis to Alexander the Great and that leave nary a stone unturned, this book picks its way between the Scylla of overwrought skepticism and the Charybdis of naïve fideism. The result is a copiously documented, user-friendly, and up-to-date treatment that will prove to be a most useful textbook for both introductory students and seasoned teachers alike. I plan on having it close by."

"Debates surrounding the history of ancient Israel are lively these days, making this new volume most welcome. Substantive essays penned by leading authorities in their respective subject areas not only provide convenient summaries of available evidence--biblical, archaeological, contextual, etc.--but also offer mature reflections on what all this evidence means for the historian. The attractiveness of the volume is enhanced by the inclusion of numerous charts, maps, photos, and sidebars. To have so much learning and sensible analysis collected in one volume is a significant achievement, and all involved in the project are to be congratulated on a job well done. I shall be recommending this book!"

"This is an outstanding work that will provide students and scholars alike with a fine introduction to the multifaceted issues and sources that are crucial to interpreting and reconstructing a history of ancient Israel. This is achieved through an impressive cadre of scholars contributing their individual expertise. Yet, the volume is very readable, and Arnold and Hess should be congratulated for their labors."

"This volume is a great source for the study of the history of ancient Israel and will be appreciated by both scholars and lay people alike. It offers insightful and well written articles, a good discussion of the current issues and sources, and contains a thoughtful bibliography for further study."

"A collection of writings by different authors such as this will contain various methodological approaches and historical and theological points of view. This is deemed a strength, not a weakness. Despite the differences, the articles remain faithful to the spirit of the Institute for Biblical Research, an organization of evangelical scholars. The essays are all well grounded in critical research, both literary and historical. They provide insights into the current state of Old Testament study. An extensive bibliography is evidence both of the quality of this study and of the challenge posed for the reader. The book is recommended for scholars and serious Bible students alike."

"This book indeed answers the claim of being an introductory volume. The state of research is outlined and the most important issues and controversies are at least introduced. Thus, the book is suitable as a first approach to Ancient Israel's History. Whoever wants to go deeper into the subject matters finds the hints he needs for further readings."

"The indexes and bibliography are essential to the introduction and prove helpful to both scholars and students. . . . Each essay is written in a way guiding the student to think critically through the sources and issues, culminating with a reasonable synthesis. . . . The editors and authors of each essay should be commended for their clarity and ability to bring such a wealth of information into such a manageable format. Considering the multiple methods and perspectives related to the subject of ancient Israel's history, this volume accomplishes the goal of providing an up-to-date introduction. The collection of essays will be valuable for OT scholars and may, with caution, prove useful in an introduction to the OT course. The volume may be better suited for a history of Israel course, a biblical background course, or an archaeology of the OT course."

"I recommend this work for at least two reasons: First, it is a good example of how to utilize biblical texts critically for historical reconstruction. Second, it is a clearly written text making data and issues accessible for both laypeople and beginning students. . . . Graduate students and advanced scholars will find this work to be a helpful synthesis of biblical and ancient Near Eastern sources, as well as providing an up-to-date overview of unresolved issues. . . . Arnold and Hess have successfully organized a coherent exploration of the sources and issues related to ancient Israel's history. It is a significant and worthwhile contribution to the field. As an instructor in biblical and ancient Near Eastern studies, I plan to assign essays from this work in the years ahead."

"Although the objective of the editors was only 'to provide a current state of research on issues relative to the history of ancient Israel,' they have actually succeeded in providing a comprehensive, multi-authored history of Israel which deserves to take a place alongside the most useful volumes of this genre. . . . All kinds of readers will benefit from the richness of the information catalogued here. . . . The amount of historical information about Israel that one finds in this book is astonishing. . . . This volume is an outstanding resource. Not only have the editors fulfilled their objective to provide a snapshot of current research, they also offer us one of the best one-volume surveys on the history of Israel, to which I will often refer my students, and which will also be extremely useful for pastors and scholars seeking to update their knowledge of this fast-changing discipline."

"The Bible's historical credibility has long been in the crosshairs of academic studies. Responses to those attacks have often been simplistic and naïve. Arnold and Hess have produced a volume of sophisticated essays that provides up-to-date and responsible analyses of the historiographic issues surrounding ancient Israel's history. . . . In spite of the complexity of the material, the authors have written clearly, navigation the material in such a way that serious students can find the discussions readable and informative. . . . The editors state that they designed the volume for advanced undergraduate and graduate students; they have hit their target fairly well."

"The volume offers a huge amount of information, challenging students and scholars with new information or creative reorganizations of well-known material. . . . The overall picture of the volume with its clear and well-informed essays shows exactly what today's study of ancient Israel's history is about: a cacophony of competing narratives in a methodological minefield. Therefore, the authors should be thanked for their efforts. This is definitely a great textbook for any serious course in the history of ancient Israel."

"[This book] introduces readers to the current state of research relevant to the study of Israel. It also offers a balanced look at several debated topics in Old Testament studies, such as the historical value of the Hebrew Bible."

"Ancient Israel's History is a textbook introduction and it does a fine job of it, covering the latest historical-critical findings."