All the Lost Places 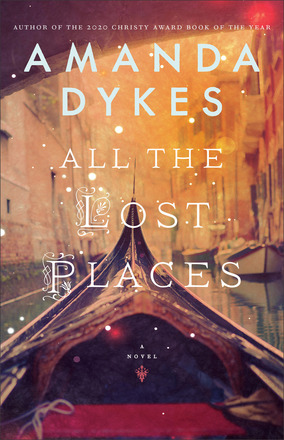 When all of Venice is unmasked, one man's identity remains a mystery . . .

1807
When a baby is discovered floating in a basket along the quiet canals of Venice, a guild of artisans takes him in and raises him as a son, skilled in each of their trades. Although the boy, Sebastien Trovato, has wrestled with questions of his origins, it isn't until a woman washes ashore on his lagoon island that answers begin to emerge. In hunting down his story, Sebastien must make a choice that could alter not just his own future, but also that of the beloved floating city.

1904
Daniel Goodman is given a fresh start in life as the century turns. Hoping to redeem a past laden with regrets, he is sent on an assignment from California to Venice to procure and translate a rare book. There, he discovers a city of colliding hope and decay, much like his own life, and a mystery wrapped in the pages of that filigree-covered volume. With the help of Vittoria, a bookshop keeper, Daniel finds himself in a web of shadows, secrets, and discoveries carefully kept within the stones and canals of the ancient city . . . and in the mystery of the man whose story the book does not finish: Sebastien Trovato.

"Dykes's pen is fused with magic and poetry. Every word's a gentle wave building into the splendor that is All the Lost Places, where struggles for identity and a place to belong find hope between the pages of a timeless story."--J'NELL CIESIELSKI, bestselling author of The Socialite

"Luscious writing, authentic characters, and an ending that satisfies to the core of the spirit, this novel is another winner from Amanda Dykes."--HEIDI CHIAVAROLI, Carol Award-winning author of Freedom's Ring and Hope Beyond the Waves

Amanda Dykes spins another stunning poetic gift straight from the heart. In a lustrous convergence of two centuries, All the Lost Places leads us with courage to the healing and purpose prepared for us. A winner for fans of historical fiction and time-slip stories.

Dykes's pen is fused with magic and poetry. Every word is a gentle wave building into the splendor that is All the Lost Places, where struggles for identity and a place to belong find hope between the pages of a timeless story.

With the skill of a mosaic artist, Amanda Dykes transports readers to a floating city and gives them a tale pieced from history, echoes of fairy tales as the glue. In All the Lost Places, deep truths meet the longings of humanity. There, they whisper of hope, forgiveness, and a love so scandalous it can only be explained by grace. Luscious writing, authentic characters, and an ending that satisfies to the core of the spirit, All the Lost Places is another winner from Amanda Dykes.

Heidi Chiavaroli, Carol Award-winning author of Freedom's Ring and Hope Beyond the Waves

Stunning. Immersive. Romantic. With her trademark depth and lyricism, Amanda Dykes delivers an epic tale that will leave readers awestruck. Through the interplay of light and shadows, an unlikely hero discovers the true meaning of his story--and redemption against all odds. Readers, in turn, will learn much about their own stories alongside him, as Dykes so bravely explores the shadows that cloud our lives and the light that remains despite them. Lost places, found anew. A can't-miss novel!

Ashley Clark, author of Where the Last Rose Blooms

"Dykes takes a historical dive into two time frames in Venice, Italy, in a magical tale that intersects literature and real life. There is a hushed awe surrounding the language, imagery, and consciousness of this story-within-a-story as it captures the spirit and intrigue of Venice. Dykes' novel is introspective, surprising, and achingly beautiful."

"Using a lyrical style heavy with metaphor, Dykes connects a myriad of details to form an epic tale of beauty and redemption with echoes of all the great love stories. With a bit of a National Treasure vibe and a unique setting, this will appeal to historical fiction fans who appreciate art, archaeology, and history."

"In Amanda Dykes' mesmerizing historical novel All the Lost Places, a California man travels to Venice, where he confronts the mysteries around a fabled book. . . . The evocative setting and themes of artistry also hint at history and God's way of fashioning and remaking beauty out of broken materials."

"This lyrical dual-narrative historical from Dykes dives into the histories of Venice, Italy, and Venice Beach, Calif., as it follows two men in search of spiritual fulfillment. Elegant prose powerfully evokes historical Venice and testifies to the power of redemption. Fans of Jaime Jo Wright will want to take a look."

"All The Lost Places is beautifully written, bringing to life Venice of the 19th and early 20th centuries. It is as easy to follow as any fairy tale (and often feels like one) but has such depth of feeling and rich detail that it's easy to be swept away into the story. I loved every page and the vivacity of the characters enchanted me. I would recommend this to anyone who enjoys historical fiction and wants a respite from books that orbit around war, and especially to anyone who feels lost in their own life. With two protagonists who also do, any reader is sure to feel welcome in these pages."

"Amanda Dykes' newest novel expresses messages of such beauty to its readers. Dykes has a way with words that is incomparable to any other author I have ever read. She soothes the anxious heart and the mind like a floating in a freshwater stream after a long journey. All the Lost Places reminds readers that they are not alone. Even in the darkest corners. Even in the lost places, where you think you could never be located. You are lost no longer but are rather found. The word now has new meaning to me thanks to All the Lost Places."