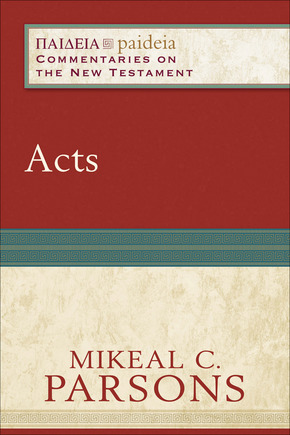 "An impressive analysis. . . . Parsons draws on his extensive studies of Greco-Roman literature and ancient concepts of physiognomy to provide a useful and illuminating commentary."--Joseph B. Tyson, Catholic Biblical Quarterly
In Acts, one of eighteen volumes in the Paideia commentary series, leading biblical scholar Mikeal Parsons gleans fresh theological insight into Acts by attending carefully to the cultural and educational context from which it emerges. Parsons see Acts as a charter document explaining and legitimating Christian identity for a general audience of early Christians living in the ancient Mediterranean world. Graduate and seminary students, professors, and pastors will benefit from this readable commentary, as will theological libraries.
About the series: Paideia commentaries explore how New Testament texts form Christian readers by
Forthcoming volumes in the Paideia series include:

"Parsons presents a masterful exposition both of the myriad strategies whereby the author of Acts attempted to persuade his original audience, and of the ways in which this ancient book continues to speak powerfully to Christian faith in our own day. Readers will find here a treasure trove of insights into Hellenistic rhetorical conventions and their usage in Acts."--John A. Darr, Theology Department, Boston College

"Mikeal Parsons deftly shepherds the reader through Acts of the Apostles in this rich and illuminating commentary. Along the "Way," he lifts up a treasure-trove of ancient rhetorical techniques employed by the author of Acts to persuade the narrative's original audience(s) to his theological vision of Christianity's beginnings. At the same time, Parsons is mindful of the need for contemporary Christians to discover the theological and moral implications of Acts for the twenty-first century. This book will be an ideal companion for students navigating Acts for the first time and a helpful resource for seasoned Acts scholars."--William Sanger Campbell, The College of St. Scholastica

"Mikeal Parsons's commentary on Acts takes an overt rhetorical approach to the text, while not losing sight of its important theological implications. I commend him for focusing his commentary on the final form of the text as it was read by the first readers and recognizing the author as a theologian in his own right. Parsons also provides useful supplemental comments to aid those unfamiliar with the terminology of ancient rhetoric. A number of Parsons's assumptions and conclusions will no doubt prompt significant further discussion."--Stanley E. Porter, president and dean, and professor of New Testament, McMaster Divinity College, Hamilton, Ontario, Canada

"Mikeal Parsons has been on the forefront of reading the Lukan writings with strategies that combine the best of ancient literary criticism with social-world analyses, and socio-rhetorical expertise with biblical-theological acumen. His Acts Paideia commentary is his most recent integrative tour de force!"--David P. Moessner, professor of biblical theology, University of Dubuque Theological Seminary, and faculty associate, Department of New Testament Studies, University of Pretoria

"[Parsons] traces the rhetorical shape of the book as a whole and in its parts and devotes special attention to identifying and describing the rhetorical devices used by Luke; this slant makes his commentary distinctive over against most previous work and gives it special value. The focus on the final text and what it intended to convey to Luke's implied audience is to be welcomed. . . . This commentary contains frequent items of historical and theological interest. But beyond this is the methodical identification of the very numerous rhetorical devices that Parsons finds in the text. . . . I have not been able to do justice to the wealth of helpful, interesting, and discussable material in this commentary, but I trust that I have said sufficient to indicate its great value for an understanding of how Acts 'works.' Many besides the students who are the target audience will want to turn to it for its important contribution to Lukan studies."--I. Howard Marshall, Review of Biblical Literature

"Preachers will find helpful insights in [this volume] as they do their own expositional studies."--PreachingNow

"With more than 20 years of scholarly expertise in Luke-Acts, Mikeal C. Parsons provides readers with a thorough and engaging commentary. . . . [It] includes an extensive bibliography, a comprehensive set of indices, and sidebars that draw the reader's attention to items of interest. . . . Parsons unveils the historical and literary world of Acts. . . . We are invited into this world through Parsons' clear writing and concise explanations. . . . This commentary is an excellent addition to the library of anyone seriously interested in understanding the historical and literary context of Acts."--Frederick S. Tappenden, Bible Study Magazine

"This study is firmly rooted in the conventions of ancient rhetoric. Students who are unfamiliar or new to this territory will find that the book's structure comes to their aid. Key terms, figures of speech, and rhetorical concerns are addressed in separate panels and boxes which summarise clearly and succinctly their functions and purpose. These make the work particularly valuable for those wishing to introduce students to the conventions of ancient rhetoric as part of their New Testament studies. This volume will be useful for both undergraduate and postgraduate students, and would make a worthwhile addition to any theological library. It would make a good purchase for those beginning to explore single volume Bible commentaries and is a fine advertisement for the Paideia series."--Fergus King, Theological Book Review

"This volume is a very helpful and rich treatment of the texts of Acts. It advances the aims of the Paideia series and should be of great benefit to students and scholars alike."--Paul Foster, Expository Times

"Parsons, a well-known and accomplished scholar of Acts, has performed a difficult task in preparing this commentary. It is accessible to serious nonexpert readers but informed by Parsons's mastery of a wide range of scholarly studies, both ancient and contemporary. . . . Parsons's commentary is dominated by an analysis that, in the end, convinces the reader that Luke was well trained in the ancient art of rhetoric. Readers unfamiliar with such rhetorical conventions will find here a rich mine of references that illuminate many passages in Acts. Parsons also includes a number of sidebars that explain and illustrate various figures of speech. . . . Parsons's commentary is an impressive analysis. . . . With this publication, Parsons draws on his extensive studies of Greco-Roman literature and ancient concepts of physiognomy to provide a useful and illuminating commentary."--Joseph B. Tyson, Catholic Biblical Quarterly

"The book of Acts is . . . wonderfully suited for the kind of exegetical venture the Paideia series promises, and Parsons is one of the scholars best equipped to lead such an expedition. His commentary's greatest strength lies in its close attention to the rhetorical dynamics operating in the overall narrative logic of Acts, in particular narrative episodes, and in characters' speeches. . . . This book's thoroughgoing ability to contextualize Acts makes it belong not only in the collections of university and seminary libraries but also in the hands of all who study Acts and its theological contributions."--Matthew L. Skinner, Religious Studies Review

"[Parsons] is particularly good at noting Old Testament quotations and allusions and gives significant attention to the flow of the narrative. He also pays serious attention to the rhetoric used in Acts, not just naming devices but explaining what they are and how they are used."--Ray Van Neste, Preaching

"The book of Acts . . . is here explained in a straightforward yet scholarly way, with much information given in boxed inserts that give outlines of the biblical text or explain subjects. . . . The help of tables and plates is also enlisted to make this a very useful and accessible work. Bibliography, index of modern authors, and index of scriptural passages are included and enhance the work's value for scholars."--International Review of Biblical Studies

"Parsons is a well-known Acts scholar who has studied the book for more than twenty-five years. . . . Each chapter opens with a useful sidebar that shows where the text fits into the narrative flow of the book. Thus the reader can easily follow the rhetorical development. . . . Parsons's commentary is filled with numerous insights on Acts. He clearly knows the literature related to the book and has spent many years considering its interpretation. His focus on individual narrative units helpfully forces the reader to attend to the text at hand. . . . This is an important commentary by an authority on Acts."--Mark Wilson, Pneuma

"Clear, informative, this welcome addition to work on Acts firmly sets 'Luke' in a cultural, educational context. . . . This commentary fits many a niche: one hopes that not only students, but preachers and leaders of study-groups will welcome this accessible volume for companionship in walking with Luke through Acts."--Peter Doble, Journal for the Study of the New Testament

"Parsons' command of ancient rhetorical strategies as discussed and employed by ancient writers will enhance his own rhetorical ethos with readers. His command of the secondary literature pertaining to Luke and Acts, reaching far beyond rhetorical strategies, is equally impressive. Readers will know that they are engaging Acts under the tutelage of a very competent and knowledgeable guide. . . . Students, teachers, and pastors looking for thoughtful guidance and well-mapped inroads into the world of the 'authorial audience' will benefit from this excellent work."--J. Bradley Chance, Interpretation

"The feature that sets this commentary apart from other moderate-sized commentaries is the focus on the rhetorical features of Acts. . . . For those with interest in rhetorical criticism, the commentary could be quite helpful."--Kenneth D. Litwak, Covenant Quarterly

Praise for the Paideia series
"The Paideia Commentary series has established itself as a solid series of concise works that focus on the final form of the biblical text, highlighting narrative flow, rhetorical devices and structure, and commenting particularly on relevant historical background and theological significance."--Craig L. Blomberg, Denver Journal

"Parsons's work in ancient rhetoric no doubt contributes to the number of Greek and Latin rhetorical terms that are cogently explained in light of their function in Acts. The discussion of Acts' rhetorical context contributes to a particular strength of this commentary: Parsons's focus on how Luke communicates his narrative and theology. . . . The Paideia series makes good use of sidebars. . . . The commentary's extensive bibliography provides a wide range of sources for readers of various levels. The indices also serve as helpful resources."--Kathy Maxwell, Christian Reflection