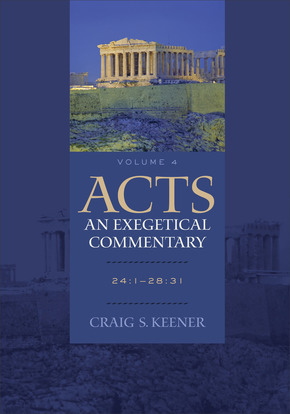 Highly respected New Testament scholar Craig Keener is known for his meticulous and comprehensive research. This commentary on Acts, his magnum opus, may be the largest and most thoroughly documented Acts commentary ever written. Useful not only for the study of Acts but also early Christianity, this work sets Acts in its first-century context.

In this volume, the last of four, Keener finishes his detailed exegesis of Acts, utilizing an unparalleled range of ancient sources and offering a wealth of fresh insights. All together, the four volumes cite more than 45,000 extrabiblical ancient references. This magisterial commentary will be an invaluable resource for New Testament professors and students, pastors, Acts scholars, and libraries.

The complete four-volume set is available at a special price.

"With this enormous commentary, Craig Keener deploys his breathtaking knowledge of the classical world to shine a bright light on both the big picture of Acts and ten thousand small details. Students of Acts will be in his debt for generations to come."

"With commendable dispatch Craig Keener has completed his monumental study of Acts. 'Commendable dispatch' excludes signs of unseemly haste, to which one might add marks of weariness. To the very end his prose remains unhindered, his footnotes rarely bearing fewer than two thousand calories of erudition. For many this will be a reference commentary, but a reference to sip and savor rather than chug and run. No wise and patient scholar will tackle a passage in Acts without engaging Keener. He reads Acts as strictly historical in aim and detail and does so with a lack of rancor and polemic that invites all to ponder his conclusions. If for no other reason, the richness of detail and depth of immersion in primary sources guarantee a long and honored life for these volumes."

Richard I. Pervo, author of Acts: A Commentary (Hermeneia)

"For serious students of Acts, here is a commentary that takes its place at once alongside those of Sir William Ramsay and F. F. Bruce. Its particular strength is its amassing of texts from the ancient world. Keener's work is essential for its survey of and detailed interaction with Acts scholarship. The New Testament researcher must have it! This is a remarkable scholarly achievement that will be eagerly used by a wide range of readers."

"This final volume on Acts is full of the meticulous scholarship and original insight we've come to expect of Keener. Despite the abundance of ancient sources and unparalleled discussion of secondary literature, the prose is beautifully clear and the commentary is a delight to use. You'll need a lot of shelf space for the full set, but Keener has already established himself as the premier commentator on Acts for academics and ministers alike."

Helen K. Bond, director of the Centre for Christian Origins and senior lecturer in New Testament, School of Divinity, University of Edinburgh

"The genre-busting commentary concluded in this volume has already attracted well-deserved admiration for the sheer ambition and energy of its execution. For all its door-stopping heft, this work constitutes a definitive and yet surprisingly accessible go-to reference for this biblical book. Professor Keener here supplies an entire library on Acts in commentary form, a landmark compendium characterized throughout by a lively critical sympathy for its text."

"In this volume, Keener caps off the most exhaustive--in the best sense of the word--commentary on Acts available today. A colossal achievement. Throughout his investigation of Paul's trials at the end of Acts, Keener maintains his meticulous engagement with Luke's text in light of a stunning array of ancient sources and contemporary scholarship. Although teachers and preachers have typically neglected these concluding chapters of Acts in favor of more familiar sections, we have no more excuses! Keener provides a gold mine of insights and information to stimulate the mind and heart."

F. Scott Spencer, professor of New Testament and biblical interpretation, Baptist Theological Seminary at Richmond; author of Journey through Acts: A Literary-Cultural Reading and The Gospel of Luke and Acts of the Apostles

"Craig Keener has put us all in his debt by writing a magisterial commentary on Acts in four volumes. No stone is left unturned in what is undoubtedly the largest work on Acts ever written. With meticulous scholarship and calling on an amazing breadth of sources, he sheds fresh historical, literary, and theological light on Acts and on the history of early Christianity. This will be the standard full-scale commentary on Acts for years to come!"

"The expansive works cited and indices for all four volumes are made all the more useful by their companion CD-ROM included in vol. 4 with PDFs that are fully searchable, including a full list of Scripture citations not included in the print indices of vol. 4. A postscript includes an acknowledgement of resources that Professor Keener is aware of that he was nonetheless unable to consult and/or engage as thoroughly as others. This gesture is indicative of the extreme care that Keener has taken to be generous in his readings and exhaustive in acquiring knowledge from which to make a wise conclusion. We are all in his debt."

"This volume in particular and the four-volume set as a whole provide a rich and thoughtful perspective on Acts. Its main contributions will be the wealth of primary sources that other scholars can engage with and mine in future work as well as [Keener's] thoughtful argument for Luke as a detailed and literarily capable historian. In his postscript, Keener expresses that in this commentary he has 'merely begun scratching the surface,' hoping to whet students' appetites. This work will no doubt do so and have a large impact on Acts scholarship, both with student and scholar alike, for years to come."

"Keener includes discussion of valuable matters in his exegesis. . . . A massive bibliography of works cited and indices of subjects, authors, and ancient sources fill 679 pages in this volume and also appear in PDF format on an accompanying CD-ROM. All of this end-matter applies to the entire commentary set. Keener's four-volume tome will serve as a primary resource for current and future generations of Acts scholars and students."

"This massive volume . . . completes what must be the most extensive commentary on the Acts of the Apostles ever attempted (4,459 pages in all!). . . . The amazing quality and thoroughness of the commentary itself and its multiple informative excursuses continue in this final volume. Not only is this a big commentary, it is also a valuable one. A measure of its erudition can be seen in the fact that 679 pages of this 1,110-page fourth volume are taken up with bibliography and indices. Bravo!"

"An impressive work of painstaking scholarship, seeming to turn over every stone especially in the area of historical background. This set, now complete, will remain a standard on Acts for years to come."