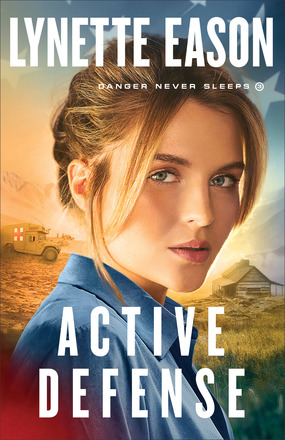 She's used to life-or-death situations.
She just didn't expect them to follow her home.

When former field surgeon Heather Fontaine returns from a party to find that someone has broken into her house--and threatened her friends--she assumes it is the stalker who has been creeping her out. She hopes to find safety and peace of mind by leaving the city and hiding out in a small town. But trouble follows her even there.

Luckily, a stalker isn't the only one observing Heather. Travis Walker has been secretly watching out for her for weeks. As owner of his own security agency, it's what he does. Together, Travis and Heather must figure out who wants her dead--and why--before it's too late.

"Buckle up, folks."--Interviews and Reviews


Lynette Eason is the bestselling author of Collateral Damage and Acceptable Risk, as well as Protecting Tanner Hollow and the Blue Justice, Women of Justice, Deadly Reunions, Hidden Identity, and Elite Guardians series. She is the winner of three ACFW Carol Awards, the Selah Award, and the Inspirational Reader's Choice Award, among others. She is a graduate of the University of South Carolina and has a master's degree in education from Converse College. Eason lives in South Carolina with her husband and two children. Learn more at www.lynetteeason.com.

"Acceptable Risk by Lynette Eason is another can't-put-down suspense thriller. Eason never disappoints me and Acceptable Risk is no exception. . . . You won't want to miss this one."--More Than a Review

"So buckle up, folks, because you are going on a wild roller-coaster ride, and you'll probably not put this book down until you are done."--Interviews and Reviews

"Lynette Eason keeps getting better with each new novel, and fans of her work will absolutely love the start to this new series. . . . I am falling more and more in love with her writing as she releases each new book."--Write-Read-Life


"Collateral Damage by Lynette Eason is full of danger, suspense, and risks. . . . Every page had me sitting on the edge of my seat."--Urban Lit Magazine

"I believe it is one of the best books that Eason has written in a long time . . . and I love her books! It had a gripping mystery and was so suspenseful that she had me on the edge of my seat. If you want a roller-coaster ride with a thrilling ending, you'll want to read this award-winning author. . . . High praise for this new series."--Relz Reviewz

"Active Defense by Lynette Eason is full of the fast-paced suspense and action, along with a dash of romance, that the author is known for."

"Eason is a master of inspirational romantic suspense, and she takes readers on another wild ride."

"Lynette Eason knows how to write a thrilling, romantic suspense with twists and turns that keep you on the edge of your seat. . . It was a rollercoaster ride of suspense for sure!"

"Eason will have readers looking over their shoulder as they dive into this story about losing control and finding something even better."

"Eason just gets better and better with each book!"