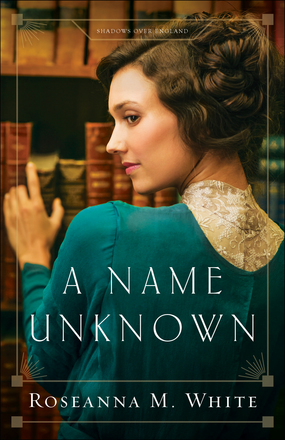 She's Out to Steal His Name. Will He Steal Her Heart Instead?

Rosemary Gresham has no family beyond the band of former urchins who helped her survive as a girl in the mean streets of London. Grown now, they are no longer pickpockets--instead they focus on high value items and have learned how to blend into upper-class society. Rosemary is beginning to question whether she can continue in this life when she's offered the challenge of a lifetime--determine whether a certain wealthy gentleman is loyal to Britain or to Germany. After all how does one steal a family's history, their very name?

As Europe moves ever closer to World War I, rumors swirl around Peter Holstein. Awkward and solitary, but with access to the king, many fear his influence. But Peter can't help his German last name and wants to prove his loyalty to the Crown--so he can go back to anonymously writing a series of popular adventure novels. When Rosemary arrives on his doorstep pretending to be a well-credentialed historian, Peter believes she's the right person to help him dig through his family's past.

When danger and suspicion continue to mount, both realize they're in a race against time to discover the truth--about Peter's past and about the undeniable attraction kindling between them.

". . . the momentum and drama of a modern thriller and the charm and intrigue of an Edwardian upper-class romance . . ." --Booklist starred review of The Reluctant Duchess

"This conclusion to White's Downton-esque drama will delight readers and sadden fans who have grown attached to such engaging, lovable characters." Publishers Weekly starred review of A Lady Unrivaled

"White finishes her Ladies of the Manor series with flourishes of adrenaline, wit, and simmering heat, proving again her mastery of historical Christian romance." Booklist starred review of A Lady Unrivaled

"A spying thief, an embattled novelist, a library overflowing with books and White's exquisite talent? How could any self-respecting fan of historical fiction say no to that? Readers will be instantly captivated by Rosemary Gresham. . . . Peter Holstein is a complicated hero with a gracious heart, and their gradual romance is graced with moments of humor, as well as adventure and a sweet message of true worth."

"White's fans will no doubt enjoy this beginning of a new historical adventure."

"Fans of Roseanna M. White seeking a summer historical romance will be delighted."

"In the first of White's new Shadows Over England series, she reprises her expertise in crafting strong and savvy female protagonists . . . .This novel thoughtfully examines the deeply personal journey of dismantling stereotypes."