A Light on the Hill 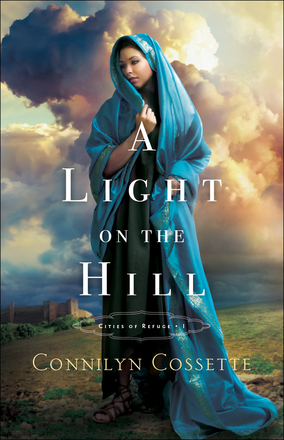 ". . . must-reads for fans of Biblical and historical fiction."--RT Book Reviews on the Out from Egypt series

Though Israel has found relative peace, Moriyah has yet to find her own. Attempting to avoid the scorn of her community, she's spent the last seven years hiding behind the veil she wears. Underneath her covering, her face is branded with the mark of the Canaanite gods, a shameful reminder of her past captivity in Jericho and an assurance that no man will ever want to marry her.

When her father finds a widower who needs a mother for his two sons, her hopes rise. But when their introduction goes horribly wrong, Moriyah is forced to flee for her life. Seeking safety at one of the newly established Levitical cities of refuge, she is wildly unprepared for the dangers she will face and the enemies--and unexpected allies--she will encounter on her way.

"Cossette delivers a soul-deep, spirit-stirring adventure set amidst the vivid, awe-inspiring beauty of the Promised Land. . . . The richness and depth of the storytelling beg readers to savor each chapter while the action-packed plot compels page after page. . . . Both the historically fascinating culture of the Levitical cities of refuge and engaging characters that challenge expectations with refreshing diversity and complexity increase the enticement of future series installments and rereads."

"Cossette debuts a biblical series that revolves around the Old Testament's Levitical sanctuary cities, set against the backdrop of ancient Israel. Accessible and fluid character-driven storytelling creates a fascinating read that will appeal to fans of Jill Eileen Smith and Angela Hunt and those who prefer their biblical fiction less academic."

"Cossette has an uncanny ability to deep-dive into her characters. I loved the main and secondary characters alike, all with just enough backstory to create a diverse mix of interwoven perspectives. Plot wise, I could not predict anything that happened. Each new turn on the characters' path is unexpected and engaging, making this a page-turner. . . . This book possesses a strong emotional heart, constantly wrestling with faith, forgiveness, acceptance, love, and trust. Cossette's talent in lovingly drawing out characters as well as historical settings is stunning and delightful, making her one of my favorite authors. Recommended!"