A Light in the Wilderness 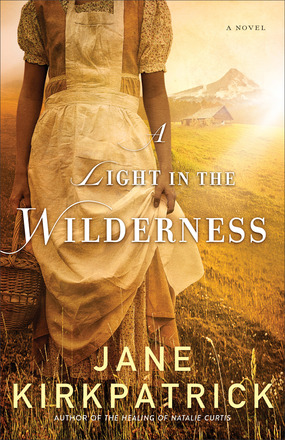 Three very different women. One dangerous journey. And a future that seems just out of reach.

Letitia holds nothing more dear than the papers that prove she is no longer a slave. They may not cause most white folks to treat her like a human being, but at least they show she is free. She trusts in those words she cannot read--as she is beginning to trust in Davey Carson, an Irish immigrant cattleman who wants her to come west with him.

Nancy Hawkins is loathe to leave her settled life for the treacherous journey by wagon train, but she is so deeply in love with her husband and she knows she will follow him anywhere--even when the trek exacts a terrible cost.

Betsy is a Kalapuya Indian, the last remnant of a once proud tribe in the Willamette Valley in Oregon territory. She spends her time trying to impart the wisdom and ways of her people to her grandson. But she will soon have another person to care for.

As season turns to season, suspicion turns to friendship, and fear turns to courage, three spirited women will discover what it means to be truly free in a land that makes promises it cannot fulfill. This multilayered story from bestselling author Jane Kirkpatrick will grip your heart and mind as you travel on the dusty and dangerous Oregon Trail into the boundless American West. Based on a true story.


Jane Kirkpatrick is the New York Times and CBA bestselling author of more than twenty-five books, including A Sweetness to the Soul, which won the coveted Wrangler Award from the Western Heritage Center. Her works have been finalists for the Christy Award, Spur Award, Oregon Book Award, and Reader's Choice awards, and have won the WILLA Literary Award and Carol Award for Historical Fiction. Many of her titles have been Book of the Month and Literary Guild selections. Jane lives in Central Oregon with her husband, Jerry. Learn more at www.jkbooks.com.

"Kirkpatrick exercises her considerable gift for making history come alive in this real-life tale of a freed slave who travels across the country to Oregon Territory in the late 1840s. Kirkpatrick draws an indelible and intriguing portrait of Letitia Carson, an African-American woman who obtains her freedom and then determinedly makes her own way in a unsympathetic society. Among her allies are her common-law husband Davey, an Irish immigrant; Nancy Hawkins, a white woman whose family is also headed to Oregon; and Betsy, a Kalapuya Indian whose separate story in Oregon Territory eventually converges with Letitia's life. Letitia is fully imagined, and Kirkpatrick skillfully relates Letitia's thoughts, cementing a bond of empathy between character and reader. On the whole, Kirkpatrick's historical homework is thorough, and her realization of a little-known African-American pioneer is persuasive and poignant."

"This heart-stirring new historical novel has romance, mystery, and adventure. Characters are sweet, charming, strong, witty, and looking for their places in the world. One character is loosely based on the true story of the first African-American woman to cross the Oregon Trail to live in freedom. Kirkpatrick has done her research and gives detailed descriptions without overwhelming the reader and the story."

"Rich with sensory imagery, well-developed characters, and peppered with native words . . ."--Christian Library Journal on Love to Water My Soul

"Kirkpatrick's research is excellent and she writes about difficult issues with honesty and respect."--RT Book Reviews on One Glorious Ambition

"Masterful storytelling . . ."--Craig Lesley, author of The Sky Fisherman, on What Once We Loved

"An oasis of peace in an often un-peaceful world."--General Examiner on Where Lilacs Still Bloom

"Kirkpatrick has, almost literally, created her own genre of fiction. Her books enfold a reader. . . . They find a secret place in each of us and bring it gently to the surface."--Salem Statesmen Journal on All Together in One Place

"Kirkpatrick gives marvelous insight into the struggle of the freed slave, the adventurous lure of the Oregon Trail with the numerous potentials it promised, and the tremendous amount of faith it took to endure."