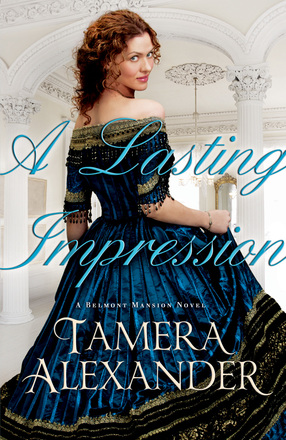 Claire Laurent's greatest aspiration is to paint something that will bring her acclaim. Yet her father insists she work as a copyist. A forger. When she's forced to flee from New Orleans to Nashville only a year after the War Between the States has ended, her path collides with attorney Sutton Monroe. She considers him a godsend for not turning her in to the authorities. But after he later refuses to come to her aid, Claire fears she's sorely misjudged the man. Finding herself among the elite of Nashville's society, Claire believes her dream to create a lasting impression in the world of art is within reach--but only if her fraudulent past remains hidden.

The Federal Army has destroyed Sutton's home and confiscated his land, and threatens to destroy his family's honor. His determination to reclaim what belongs to him and to right a grievous wrong reveals a truth that may cost him more than he ever imagined--as well as the woman he loves.

Set at Nashville's historic Belmont Mansion, a stunning antebellum manor built by Mrs. Adelicia Acklen, A Lasting Impression is a sweeping love story about a nation mending after war, the redemption of those wounded, and the courage of a man and woman to see themselves--and each other--for who they really are.

"A Lasting Impression is a wonderful start to a new series. With writing that is rich and textured, Ms. Alexander paints a portrait of Belmont and Nashville after the Civil War that will pull you in and almost make you believe that you are living there yourself."--Robin Lee Hatcher, best-selling author of Belonging

"Alexander crafts a pleasing and well-written romance that is filled with adventure and intrigue. Subtly weaving in the main character's steadfast faith in God, the book is full of faith and full of life. Readers who enjoy romantic novels but also want to feel inspired will definitely enjoy this satisfying read."--Publishers Weekly on Within My Heart

"To put it simply: This book is a full-on HIT. Belmont's history is fascinating and provides a rich setting for historical romance. The author has placed a diverse palette of colorful characters within her heady setting, but among them none is quite as vibrantly drawn as The Lady of Belmont herself, Mrs. Adelicia Acklen."

"A thorough novel with menacing characters from Claire's past mingling with Tennessee's finest folks and the inspiring Belmont Mansion, A Lasting Impression is a compelling story that doesn't let go once it takes hold."