A Draw of Kings 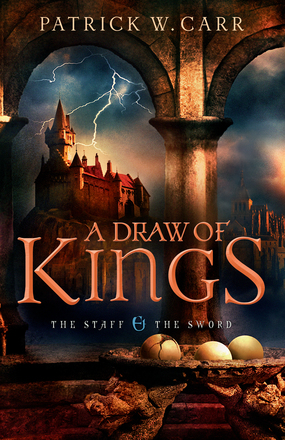 Their journey to Merakh should have made Errol and his companions heroes of the realm. Instead, they've been branded enemies of the kingdom.

In the wake of the king's death, Duke Weir is ruling the country--and he intends to marry Adora to bring an heir from the royal line. With Errol and the others imprisoned and the identity of the rightful heir to the throne still hidden in secrecy, Illustra is on the verge of civil war--and threatened by hostile forces gathering on every side.

A dangerous mission to free Errol is attempted, but the dangers facing the kingdom mount with every passing moment. The barrier has fallen, ferrals are swarming toward the land, and their enemies draw ever closer. Will the discovery of the true heir turn back the tide of Illustra's destruction?

The third book in The Staff and the Sword series is another entertaining dip into the adventures of Illustra and the engaging characters who inhabit the realm. CBA Retailers+ Resources

This series is stunning in its beauty and begs to be read, savored, shared, and read again.