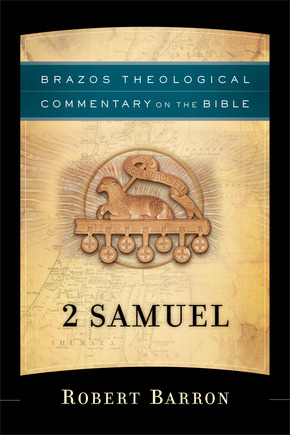 The Brazos Theological Commentary on the Bible encourages readers to explore how the vital roots of the ancient Christian tradition should inform and shape faithfulness today. In this addition to the series, acclaimed author, speaker, and theologian Robert Barron offers a theological exegesis of 2 Samuel. He highlights three major themes: God's non-competitive transcendence, the play between divine and non-divine causality, and the role of Old Testament kingship. As with other volumes in the series, this book is ideal for those called to ministry, serving as a rich resource for preachers, teachers, students, and study groups.

"Robert Barron is a great teacher of the Church and a gifted biblical commentator who breaks open the Word of God for our day as Ambrose and Augustine did for theirs."

"In this book, Barron brings his theological erudition to the task of interpreting Sacred Scripture. The result will be a delight for all his readers. Not only will they relish the many profundities of the text, but they will be able to join the author in wrestling with its various conundrums. Even the challenging parts of David's life are handled in fresh, creative, and--most important--productive ways."

"Robert Barron has written a beautiful commentary on 2 Samuel, and it will be a tribute to the series. He has a keen sense of the subtlety of the narrative and the imagination to draw theological and spiritual meaning from particulars. Yet he is neither doctrinaire nor heavy-handed; his interpretations always grow out of the story and do not become theological disquisitions. Barron writes well, and this commentary is a pleasure to read. Even serious readers of the Bible will delight in the surprising things he discerns in the narrative."

"In this impressive example of theological exegesis, Robert Barron shows that he is both an outstanding theologian and a masterful interpreter of scripture. The unforgettable narrative of the rise and fall of King David springs to life in Barron's hands. Along the way, he demonstrates that the book of 2 Samuel is not just a literary masterpiece but an essential bridge between the Old and New Testaments."

"Robert Barron is one of the clearest and most compelling Christian communicators I know. He is a scholar, yet he relates easily to all the faithful. As a preacher he reaches both mind and heart. Now, in this major biblical commentary, he has given us a book that measures up to the standard already established by this excellent series. The story of 2 Samuel 'lives and breathes' in Barron's words."

"Barron's achievement is crazy good. It would be trite and yet true to say that he writes well or that his commentary reads like a novel. I kept jotting the word eloquent in the margins. . . . Barron's reservoir of allusion is impressive, and his helpful references to history and literature are more than adornment. . . . He helps readers to see the broader story. His grasp of the complex development of David's character is unsurpassed. . . . Most examples of those trying their hand at canonical reflection are restrained, maybe too careful. Barron is daring, even playful, and I have to admit that I love the strategy he employs as he makes his move from a Bronze Age story to the Christian dispensation. . . . As a preacher under weekly pressure to cobble a sermon together, I find myself loving Barron and his book. I want to continue to ponder the way he hints at Christian allusions and to find more danger zones."

"Barron trains his theological eye on the account of the rise and fall of King David. He moves through the biblical book chapter by chapter, weaving together insights from the reconstruction of ancient history, biblical exegesis, and the Christian theological tradition. He remains faithful to the biblical story, providing both background and foreground for its interpretation. . . . It is clear that Barron knows this biblical book quite well. He is also well acquainted with the history of its interpretation. This study is a fine example of postcritical doctrinal biblical interpretation."

"The Brazos commentary series fills a niche in the crowded field of biblical commentaries and the latest addition by Robert Barron continues the unique approach admirably. . . . 2 Samuel is a refreshing read with both scholarly and devotional insights throughout. It serves as a supplement to the technical commentaries already available and is more spiritually satisfying than most."

"[This book] does a nice job demonstrating the place of 2 Samuel in the theological narrative of the whole Bible. . . . The chapters are brief enough and engagingly written so that they will be useful to those preaching these texts."

"'Delightful' is rarely used, for a variety of reasons, to describe a biblical commentary, but it is an apt label for Robert Barron's 2 Samuel. . . . [It] is a volume that every pastor and Bible scholar should own and reference regularly. Not only will it assist the reader in understanding the particular chapters in 2 Samuel; it will also make them a more competent reader of the entire Bible, since virtually every page is filled with intertextual connections and narrative parallels between 2 Samuel and other parts of the Bible. . . . 2 Samuel is highly recommended for its textual insights, theological depth, and literary skill. Barron's adeptness in weaving together intertextual links, narrative parallels, typology, philosophy, and classic Christian theology make this commentary a rich tapestry filled with insight and erudition. It should be on the shelf of every student of Scripture."

"Barron's chapter-by-chapter exposition of 2 Samuel is readable and engaging. . . . He writes with an eye toward Scripture's context and the history of interpretation, even drawing on Dante and G. K. Chesterton. . . . Preachers, teachers, and students would do well to pick up Barron's volume and critically interact with his theological interpretations."