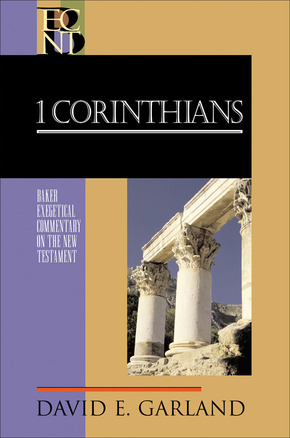 David Garland has written a major commentary on Paul's First Letter to the Corinthians. His detailed study of one of the most important epistles in the New Testament is sure to become a standard resource for pastors, students, and scholars.

After an introductory chapter that considers the context of the epistle and what is known about the social setting and cultural world of Corinth, Garland turns to his exegetical study. In order to maintain the overall flow of Paul's thought and show the larger themes more clearly, the verse-by-verse comments are organized in larger exegetical units. For each unit, the author provides a summary that locates it within the broader context of the surrounding material, and he provides his own translation of the Greek text.

The author's wealth of knowledge and exhaustive research is evident in his exposition. To clarify the meaning of the text, he incorporates references from parallel material in the Pauline corpus and from extrabiblical sources that highlight relevant aspects of the religious, cultural, and social context. Throughout his study, Garland interacts with notable previous commentators and provides extensive notes for the reader's consideration and further research. Relevant text-critical issues are discussed in a section labeled "Additional Notes." There biblical scholars will find comments on the more technical aspects of the text, including variant readings and grammatical issues.

As with the other volumes in the Baker Exegetical Commentary on the New Testament, the author provides a scholarly commentary on the text that will be useful and readable for preachers and thoughtful lay readers. The oft-praised BECNT format and design make the volume even more accessible.

"A major achievement, David Garland's commentary will take its place alongside other 'big' works on 1 Corinthians (notably those of Fee and Thiselton). The author displays an enviable grasp of the cultural challenges raised in the letter as well as an assured familiarity with biblical and Greco-Roman sources and the secondary authorities. At the same time his text is both readable and relevant. This is a further significant contribution to Corinthian studies."--Paul Barnett, Anglican bishop; teaching fellow at Regent College, Vancouver, British Columbia

"This thoroughly researched, clearly written volume is a fine addition to an already respected series. It will offer seasoned guidance to its grateful readers."--Charles H. Talbert, distinguished professor of religion, Baylor University

"I warmly commend this commentary. I am impressed by its careful scholarship and sane judgments. It offers reliable and constructive exegesis based on a wide interaction with scholarly literature. It retains an eye to theology and to pastoral application, with clear comments and often apt turns of phrase."--Anthony C. Thiselton, University of Nottingham

"We have come to expect from David Garland work that is well researched, wise in its judgments, and instructive for life and thought. This commentary does not disappoint. Garland's work is fully informed and offers sound and useful discussion of this crucial letter. This commentary is a significant and worthwhile achievement."--Klyne Snodgrass, North Park Theological Seminary

"Garland makes an outstanding contribution to the BECNT series with this scholarly work on 1 Corinthians. Readers will appreciate the thorough attention given to matters of interpretation in this commentary, especially Garland's careful work with the historical and social backgrounds and with the Old Testament and Hellenistic materials that shed light on Paul's letter. The commentary is written with enthusiasm, insight, and genuine wit, so that readers will enjoy as well as profit from studying this volume."--Marion L. Soards, professor of New Testament studies, Louisville Presbyterian Theological Seminary

Praise for the series:
"This series has set a new standard in reader-friendliness with its attractive presentation that combines detailed exegetical comment on the Greek text with accessibility for those who have little or no knowledge of the original language of the New Testament."--I. Howard Marshall, University of Aberdeen

"Of special interest . . . [are] the detailed treatments of selected texts from Isaiah itself together with the excursuses at the end of four of the chapters on postexilic Jewish topics."--J. T. Williams, Journal for the Study of the Old Testament

"A substantial piece of work worthy of serious engagement not only by those tasked with preaching but by all students of this challenging letter. . . . This is an extremely well-researched volume. Not only does Garland dialogue with the standard commentaries (up to and including recent major works by Raymond Collins and Anthony Thiselton), but he also engages much recent specialized secondary literature. . . . A particularly welcome feature of the commentary is its copious reference to ancient primary sources. . . . Especially helpful are the frequent windows onto ancient rhetorical conventions. . . . Garland's commentary will make its most significant contribution in the context of exegesis courses, where it will serve as a fine model and a stimulating conversation partner."--Garwood P. Anderson, Review of Biblical Literature

"[The Baker Exegetical Commentary on the New Testament] series provides detailed commentary on the biblical text for students and preachers. This substantial volume on 1 Corinthians by a well-respected New Testament scholar is a superb example. Garland offers the reader a fair-minded and detailed analysis of the text. He works from the Greek text but enough information is given to guide those who are not familiar with Greek to benefit from the commentary as well. Garland works through the many challenging issues posed by the letter, offering a quick survey of major scholarship on key questions and then drawing out the rich theology of this text."--Donald Senior, Bible Today

"Garland is an outstanding New Testament scholar and his work reflects careful exegesis written with a concern for those who preach and teach the text. This commentary is likely to become one of the standard works to which preachers turn in studying Paul's first epistle to the Corinthian church."--Michael Duduit, Preaching

"Effectively provides a broad descriptive picture of Roman Corinth and how its distinctive position as a Roman colony affected daily life both within and outside the believing community. . . . This commentary deserves commendation for treating 1 Corinthians in such a way as to make it accessible to pastors and others involved in studying this epistle. Garland avoids falling prey to cataloguing every minor exegetical issue and instead only addresses the main exegetical issues that add to an understanding of the epistle as a whole. This is a commentary that pastors and laity can turn to for years to come as a definitive source."--Kate C. Donahoe, Journal of the Evangelical Theological Society

"Garland's exegetical approach fits well within the intended framework set forth by the editors of the [Baker Exegetical Commentary on the New Testament] series. . . . Garland's commentary is solid in its research, balanced in positions taken, and useful for the audience for whom it is intended, namely, pastors seeking a resource for preaching. Particularly helpful are the occasional expositions that conclude with a section on theological relevance . . . or hermeneutical perspectives."--John Gillman, Catholic Biblical Quarterly

"Comprehensiveness is a virtue in major commentaries, and by that measure this volume is exemplary. . . . This book is well laid out, cleanly edited, and comprehensively indexed. Those whose theological perspectives fit closely with those of Garland may choose to make this book their standard reference work on 1 Corinthians. Even those who disagree with some of Garland's interpretations will find here a helpful resource and a stimulating dialogue partner."--Sandra Hack Polaski, Interpretation

"Garland . . . possesses an enviably clear prose style. He puts it to good use, deftly leading the reader towards definite conclusions through a mass of exegetical details. In the process the extremely thorough research underlying the commentary is revealed. Several different scholarly perspectives are introduced on most exegetical issues. They are reported fairly to a fault and judiciously evaluated before the author reveals his own opinions and the reasons for them. . . . Garland has produced a thoroughly competent commentary on 1 Corinthians. . . . It deserves to find a ready audience among undergraduates studying 1 Corinthians, whom it will provide with the maximum of information in return for the effort of reading. More importantly, those learning exegesis are provided with a model of how to engage the text, make use of secondary literature and argue to clear conclusions. In accordance with the aims of the series, this commentary should also be of great use to preachers."--Stephen J. Chester, Journal for the Study of the New Testament

"Garland's exegetical comments offer solid and steady guidance for readers of this epistle. At points he introduces interpretations that are fresh and helpful. Alongside the other major commentaries on this epistle, this treatment assists in enriching understanding of Paul's thought in general and the specific issues being addressed in the Corinthian situation."--Paul Foster, Expository Times

"With exacting attention to the Greek text Garland is a good guide through the epistle. He highlights at the outset that Corinth was 'a religious melting pot' with these outside influences affecting the thinking and behaviour of the congregation. He also rightly identifies how Paul brings his eschatology to bear on many of the problems at Corinth. . . . An important contribution to an important series."--Scottish Bulletin of Evangelical Theology

Praise for the series:

"In this age of unprecedented proliferation of biblical commentary series, it is an outstanding accomplishment for the Baker Exegetical series consistently to have produced what with only rare exceptions have become the best available commentaries on the Greek text of the New Testament book or books treated."--Craig Blomberg, Denver Journal

"Rigorous exegesis by seasoned scholars with explicit evangelical commitments. This is also one of the best-designed, easy-to-read series as it includes intro matters, then each commentator's translation, commentary, and textual notes for every passage. Very reliable."--Bruce Riley Ashford and Grant Taylor, Between the Times blog