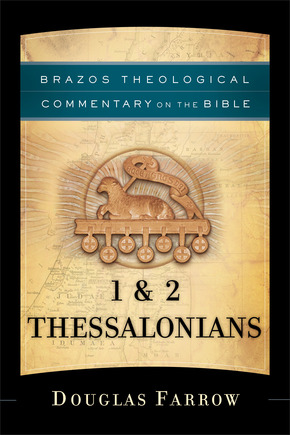 The Brazos Theological Commentary on the Bible encourages readers to explore how the vital roots of the ancient Christian tradition inform and shape faithfulness today. In this volume, one of today's leading theologians offers a theological reading of 1 and 2 Thessalonians. As with other series volumes, this commentary is designed to serve the church--providing a rich resource for preachers, teachers, students, and study groups--and to demonstrate the continuing intellectual and practical viability of theological interpretation of the Bible.

"Douglas Farrow admirably fulfills the stated aims of the Brazos series of commentaries. He constantly respects the Church and its rule of faith. He relates the epistle to the contemporary world. He maintains excellent competence in exegesis. His commentary throbs with his passion for Paul and for this earliest Christian letter. His concern for the whole Church includes regular respect for patristic writers. This volume well combines New Testament studies and Christian theology."

"How do the earliest letters of the apostle Paul read when interpreted not only in their original setting but in light of the faith and thinking of the great teachers in Christian history? In what may appear to some as reckless abandon, Douglas Farrow shows that the simplest words and phrases of Paul's writings echo across the centuries in ways that could not be discerned when they were first written. And the message they convey is clear: the wisdom of our age has no place for 1 & 2 Thessalonians."