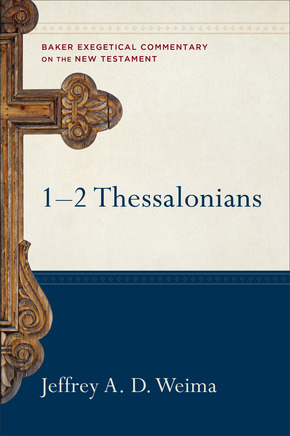 In this addition to the critically acclaimed BECNT series, respected New Testament scholar Jeffrey Weima offers pastors, students, and teachers the most up-to-date and substantive commentary available on 1-2 Thessalonians. Weima, a Thessalonians expert, experienced teacher, and widely traveled speaker, presents well-informed evangelical scholarship at an accessible level to help readers understand the sociological, historical, and theological aspects of these letters. As with all BECNT volumes, this commentary features the author's detailed interaction with the Greek text, extensive research, thoughtful chapter-by-chapter exegesis, and a user-friendly design. It admirably achieves the dual aims of the series--academic sophistication with pastoral sensitivity and accessibility.

"Weima has written a full and authoritative commentary on 1 and 2 Thessalonians that readers will want to consult regularly and frequently. He brings a wealth of previous research to bear upon his exegesis. The result is well-considered and includes thoughtful positions at almost every juncture. One of the most appealing features of the commentary is Weima's interpretation within the context of ancient epistolary structure, rather than the all-too-frequently-used rhetorical analysis. Weima sets the stage for his exegesis and exposition of each section by laying out the literary character and shape of the unit to be discussed. He also provides a detailed and helpful introduction to the commentary that emphasizes the historical background of these letters. Weima shows awareness of the current debate on a wide range of issues in Thessalonians research, while also ably defending traditional positions regarding authorship, interpretation, and even text-critical matters. I am sure that this commentary will be widely used."

"Is it possible for a commentary to be both technical and accessible, comprehensive and concise, academic and pastoral? Weima has produced precisely such a commentary on the Thessalonian Letters. One would be hard-pressed to find a full-length, up-to-date treatment of these letters that offers more than Weima's. Judicious in judgment, gracious in engagement, and clear in argument, this commentary catapults Weima to the front of an increasingly crowded field. It will become a standard, go-to resource for scholars, ministers, and students alike."

"Already an acknowledged expert on the Thessalonian Letters, Weima offers fellow Christians a clear and erudite interpretation. This exegetical commentary now stands among the authoritative works on 1 and 2 Thessalonians."

"If not the 'definitive' commentary (if such a thing ever existed), [Weima] has indeed produced what is currently the major scholarly commentary on these two letters. On that achievement he is to be congratulated. The commentary commences with a solid introduction. . . . The commentary sections on both letters are sure-footed throughout. . . . This is an excellent treatment of these two letters to the Thessalonians. Weima has produced a commentary that is highly readable, and at the same time makes an important academic contribution. This volume will be widely consulted by all working on these letters."

"Noted scholar Jeffrey Weima . . . provides this substantial commentary on 1 and 2 Thessalonians in the respected Baker Exegetical Commentary series. . . . [It] is detailed and rich and will serve as an excellent resource for those who want to engage in a serious study of these early Pauline texts."

"[This commentary] will become a reference work for future generations. It is a well balanced, full-length (more than 700 pages on 136 verses), conservative, evangelical commentary. It pays close attention to the historical situation and the theology of 1-2 Thessalonians through detailed sustained exegesis of the Greek text. It is exhaustive in its scope but not exhausting to read because Weima masterfully negotiates the secondary literature while allowing the primary text the pride of place in evaluating the claims of previous scholarship. . . . It is written in a way that makes it accessible to the interested reader. . . . This is an excellent commentary that will become a standard for libraries and scholars because of its detail and balance. I will set it as compulsory reading for my graduate students."

"A superb, scholarly commentary on 1 and 2 Thessalonians. . . . The level of detail and mastery of sources in this commentary are no surprise as Weima has spent a large portion of his academic pursuits in the study of 1 and 2 Thessalonians. . . . Weima's discussion of each clause includes significant Greek semantic and grammatical analysis. In addition, especially impressive is his presentation of various scholars' rationales and counter-rationales for numerous clause-level exegetical decisions, not to mention higher-level conclusions. . . . For detailed exegesis and presentation of various scholarly views, Weima's 1-2 Thessalonians will be the evangelical 'standard' for many years to come."

"[A] thorough examination. . . . Few, if any, lexical, grammatical, textual, or exegetical questions remain unexamined. One may not always agree with Weima's conclusions, but he gets all the options onto the capacious table. . . . Of the numerous strengths on display, his analysis of structure may well be the greatest."

"Weima's 1-2 Thessalonians takes its place as one of the leading commentaries on these letters. Following decades of studying these letters, Weima gives us a very thorough examination (investigating practically every issue) with mature theological reflection, as well."

"It is hard to think of a commentary on these two letters that will give Bible teachers and students as sure-footed a guide. Weima has produced an incredibly thorough, carefully argued, and judicious commentary. The great strength of this commentary is the comprehensiveness with which he considers exegetical issues, combined with the carefulness of his own conclusions. . . . This is an excellent volume which I think will be the definitive commentary on these letters for many years."

"Over the past few years, I have collected about two dozen commentaries on 1-2 Thessalonians for my research. . . . This is the most thoroughly-researched, soundly-argued evangelical academic commentary to date, and it will serve students and pastors well for a very long time. Weima has spent a lifetime researching these letters and there is hardly a soul in the world (perhaps Karl Donfried is a rare exception!) who knows these letters and the history of their study better. I have been impressed time and time again with Weima's careful argumentation and his attention to details: linguistic, exegetical, historical, etc. . . . If I were collecting commentaries on the New Testament (e.g., as a pastor), Weima's would be at the top of my list for 1-2 Thessalonians."

"In keeping with the high standards of the series, Weima offers a rigorous examination of the Greek text, attending to detailed grammatical issues, illuminating the literary style and structure of the epistles, and bringing significant historical background to bear on the text. . . . Weima is honest with his sources and thorough in his discussion, which makes this commentary a great resource for scholars and pastors looking to engage contemporary scholarship on Thessalonians and not simply to be presented with the views of one scholar. While exhaustive, the commentary is also quite accessible to scholar and layperson alike. . . . This book is the culmination of twenty years of Weima's scholarship on these two letters. . . . Ultimately, the years of work in Thessalonians result in a commentary that exhibits a mature approach and depth of insight that moves the work toward Weima's original ambition of a definitive volume. This commentary is an authoritative text on 1-2 Thessalonians and the new standard against which future Thessalonians commentaries will be compared."

"Weima's commentary on 1 and 2 Thessalonians is thorough, stimulating, and well researched. Pastors, students, and scholars of all sorts would be benefitted by using it. . . . The commentary is written within the Reformed tradition, but its scope is broad and deep, interacting with top scholars in the field. . . . Weima has certainly shown himself to be an able exegete, following the evidence and changing his position when the text presses him to do so. . . . Weima's commentary is an important work, exemplary of his careful and painstaking scholarship on 1 and 2 Thessalonians, a labor of love for the church. Weima is to be commended for his work and this commentary should not be neglected. It is a gift of God to his church, which we should appreciate and learn from with great thankfulness in God in Christ Jesus."

"A welcome addition to the growing corpus of Pauline commentaries. . . . Consult Weima for his excellent analysis of the Greek text of the Thessalonian epistles. He does an exceptional job dealing with difficult syntax and textual matters. Also, another strength is his effort at putting 1-2 Thessalonians in their cultural and historical setting. Finally, this strong evangelical commentary would be very helpful in research and teaching and preaching of the Thessalonian epistles."

Books at a Glance

"Only every great once in a while does a scholar publish a book that can rightly be called his 'great work.' Jeff Weima's commentary on 1-2 Thessalonians fits into that category."

"A very lengthy but necessary introduction (nearly sixty pages) . . . provides excellent overviews of key issues. . . . Well written and--thanks in part to the pleasing structure and formatting of the series generally--very useful as [a] reference [tool]."