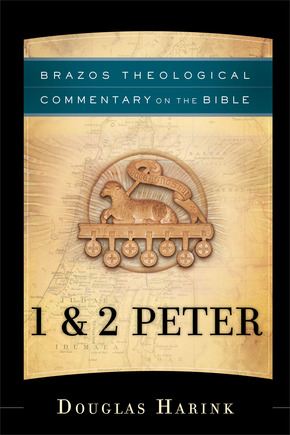 Pastors and leaders of the ancient church interpreted the Bible theologically, believing Scripture as a whole witnessed to the gospel of Jesus Christ. Modern interpreters of the Bible questioned this premise. But in recent decades, a critical mass of theologians and biblical scholars has begun to reassert the priority of a theological reading of Scripture. The Brazos Theological Commentary on the Bible enlists leading theologians to read and interpret Scripture for the twenty-first century. In this addition to the series, Douglas Harink offers an insightful theological exegesis of 1 & 2 Peter that will be of use to professors and students in New Testament, the Epistles of Peter, and theological interpretation courses, as well as pastors, church leaders, and libraries.

"No theologian over the past decade has been more concerned to articulate the apocalyptic heart of the gospel faithfully than Doug Harink. In this commentary, Harink brings that concern to bear on the message of 1 & 2 Peter. The result is a passionate book that allows Peter to take his place alongside Paul as an apostle of God's world-transforming apocalypse in Jesus Christ. By way of insightful and provocative engagement with Petrine scholarship, contemporary theology, and critical theory, Harink brings the message of Peter into challenging conversation with the Constantinianism of contemporary North American culture. To those who feel acutely the weight of living as 'exiles of the Diaspora' in our culture today, the words of Harink's book will break forth as an indispensable, powerful witness to the decisive and liberating grace alone by which we live into the 'holiness and godliness' that Peter names as a sign of the coming new creation in Christ."--Nathan R. Kerr, author of Christ, History and Apocalyptic: The Politics of Christian Mission

"Doug Harink's commentary on the Petrine epistles aptly demonstrates the guiding principle of the series to which this volume belongs: 'dogma clarifies rather than obscures.' While paying close attention to the biblical text, Harink also opens up for the reader interconnected vistas in patristics, speculative theology, ethics, politics, philosophy, and aesthetics, as well as 'some of the treasures of Orthodoxy.' The book is especially helpful in that it speaks to the generalist while also refusing to back off from some of the more controversial passages in these biblical books. Even where the reader does not agree, he or she will not be bored!"--Edith M. Humphrey, William F. Orr Professor of New Testament, Pittsburgh Theological Seminary

"This is an example of theological interpretation of scripture at its best. Harink combines close attention to the text with thoughtful theological reflection. He is aware of various historical-critical issues but does not allow them to distract from the theological concerns he brings to these letters. Moreover, his generous engagement with a variety of theological traditions invites all Christians to look at these oft-neglected epistles afresh."--Stephen E. Fowl, professor of theology, Loyola College in Maryland

"This volume on 1 & 2 Peter by Douglas Harink vindicates the concept of the Brazos Theological Commentary on the Bible in one stroke. We are happily back in the company of the premodern interpreters, but--let this be noted--Origen, Augustine, Calvin, and their contemporaries are called upon by Harink to serve in one of the most immediately relevant, ethically rigorous, politically significant, and hermeneutically wide-ranging treatments of New Testament texts to appear on the postmodern landscape. There will be opposition to this enterprise, but preachers of the gospel should make no mistake--this is the real deal."--Fleming Rutledge, author of Not Ashamed of the Gospel and The Bible and the New York Times

"An outstanding, illuminating, impressive example of a commentary written in the canonical mode. Harink demonstrates the possibility of composing a commentary ancient in style, but contemporary in its cultural frame. This commentary displays instructive subtlety and scope in braiding scriptural, patristic, Reformation, modern, and postmodern wisdom together with the texts of 1 and 2 Peter, for the sake of the church, and therefore for the sake of the world."--A. K. M. Adam, tutor in New Testament and Greek, St. Stephen's House, University of Oxford

"A good commentator of the biblical texts is expected to be well acquainted on the one hand with the original languages, their grammar, and the meanings of words, phrases, and idioms of those languages, and on the other with the context and language of the target audience. Douglas Harink masterfully combines these qualities with his insightful works of Euro-American scholars who have examined the two letters bearing the name of Peter. His christological orientation, his commitment to the ministry of the church, and his deep desire to serve the people are evident throughout this commentary. . . . Every student of theology will benefit from engaging with this commentary."--Daniel Jeyaraj, Theological Book Review

"A good theological exposition, often bringing in the thoughts of systematicians and ethicists in a helpful way, as well as making pointed application."--Ray Van Neste, Preaching